Mathematical models can simulate almost anything. Today we are only able to calculate small protein structures, but with the development of new models it might be possible to calculate all proteins in the human genome.

Thomas Hamelryck works with protein structures. He graduated as a bio engineer in Belgium, has respectively a PhD and a postdoc within the field of protein structures, and has been employed as a lecturer and researcher at the Bioinformatics Centre at the University of Copenhagen Biocenter since 2004.

Along the way Thomas Hamelryck´s research focus has moved increasingly in the direction of modelling rather than the purely experimental, and it is mainly for the development of mathematical models for measuring proteins that he participates in the research project "Dynamical systems: mathematical modelling and statistical methods in social science, health and science." 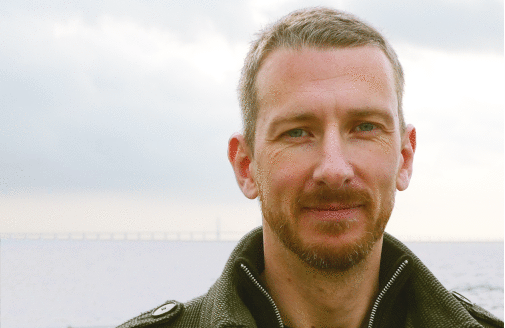 - The amazing thing is that you can simulate almost anything! Not that you can do totally without experiments - of course you will never be able to do that - but the combination of those two approaches, the experimental and the modelling, can lead us far beyond where we stand today, says Thomas Hamelryck.

- Our bodies are full of proteins, each in turn containing 20 different amino acids. The proteins are responsible for our immune system, our digestion, for everything actually, just as almost all medications interact with proteins. So this is a huge, fascinating and extremely important area of research.

- It's easy enough to measure protein sequences, i.e. the order and composition of the proteins, but we also want to know what their structure looks like in 3D. We want to get better at calculating and predicting protein structures that are flexible and move and thus gain a deeper insight. And in this respect mathematical models take you so much further, not to mention how much time and how much money you can save by modelling.

How would a deeper understanding help concretely?

- If we look at something like proteins in bacteria, for instance... With a deeper understanding of what proteins look like as well as how they interact, you can go in and block the bacteria or viruses from clasping on to a human cell or from developing, thus preventing diseases from occurring or spreading and evolving, such as has been the case with the HIV virus for example, Thomas Hamelryck explains.

He adds that HIV in particular is a good example of a virus that we have become much better at handling over the years, improving the length and quality of life for far more people, because a deeper understanding of protein structures has made it possible to postpone and dampen the disease’s development.

- Today we can only calculate small protein structures, but with mathematical models we will be able to measure much larger structures – in the human body as well as in anything else alive for that matter, even though we are still only dealing with the same basic 20 amino acids that can be combined in an almost infinite number of ways.

- As a researcher I want to find a solution, a deeper solution where we really understand what proteins look like and can predict how the different structures evolve and interact. One day we may even get to the point where we will be able to calculate all proteins in the human genome.

Is this a realistic scenario, do you think?

- Definitely. This is the direction that things are developing so it's only a matter of time. In the research project "Dynamic systems" part of the purpose is the further development of an existing model and part is the development of an entirely new mathematical model.

Thomas Hamelryck also adds that people with interest in the topic can join www.phaistos.org and study the not yet fully developed simulation program that has been created in collaboration with English statisticians for the purpose of calculating proteins and carrying out experimental measurements.

In what other ways can the simulations help us?

- As mentioned not least in connection with diseases and development of new and better medicines, but also when it comes to such things as the design of artificial proteins. In detergents for example, where they have come a long way in the development of artificial proteins that remove and dissolve grease and stains. Danish Novozymes is actually the largest firm in the world in the field of enzyme production, and enzymes are precisely proteins that catalyse chemical processes, explains Thomas Hamelryck.

Designing new proteins - what's wrong with the ones we have?

- Thanks to the development of ever better and more advanced models, we will become even more skilled at designing new artificial proteins, for example, new forms of plastic. It’s already happening! One of the things that is in the process of being developed is threads of the same type - or rather, of a similar type - as those the spiders spin in their nets, for the purpose of producing fabrics for textile production.

- Classical chemical processes are unfortunately synonymous with high temperatures, which means a high CO2 consumption. Protein chemistry however uses low temperatures, which is why we call it green chemistry. Both the climate aspect and the high degree of sustainability in terms of avoided CO2 emissions ensures that the protein chemistry will be the big thing when it comes to the development of new materials as well as new drugs in the future, says Thomas Hamelryck and adds:

- The green chemistry is quite simply well worth it in every way as it is gentle with regards to nature and the environment, which to me is of course an extra motivational dimension in research.

Thomas Hamelryck has a MSc in Bio-engineering and Molecular Biology from the University of Brussels (VUB), Belgium (1994).

He holds a PhD in protein crystallography from the same university (1999). He elucidated some of the basic principles behind protein-sugar interactions, which are of crucial importance for various disease- and health-related cellular recognition mechanisms.